We are Hiring!
Menu

How much does it cost to build a Gaming App?

Quick Summary: How much do gaming apps cost to make? How much should you budget for your custom game app development? We get these types of questions a lot! For aspiring game developers, it’s essential to know how much it can cost to make all sorts of games, where these costs come from, and how budgets for creating games are decided upon.

How popular are Mobile Gaming Apps? 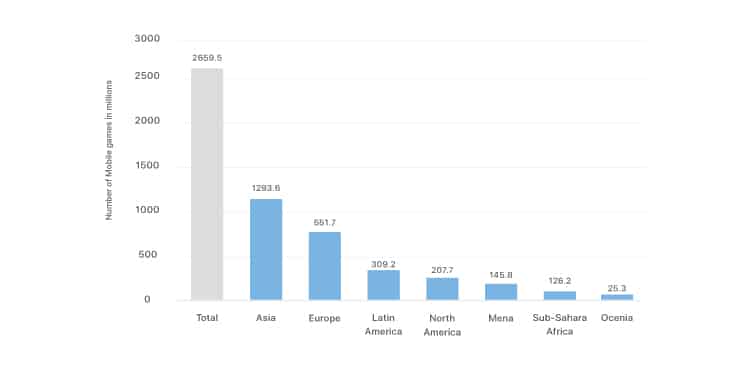 What Are the Most Popular Mobile Games in 2022?

With 2.7 billion mobile gamers worldwide, the trend and demand for mobile games are constantly surging. Here are some of the most popular gaming applications.

Clash of Clans is a popular game where players must build their village and protect it from enemy attacks. Players have to build -their armies and fight in clan wars. The game is free to install and has become more popular with the introduction of a new feature called Clan Capital.

Clash Royale is a free-to-play tower defense game where players compete in online battle arenas. Players can compete in 1v1 or 2v2 games to defeat the opponent. Those who demolish the King’s Tower in three minutes will win.

The next on our list of the most popular apps is PUBG. The most talked about gaming app that includes multiplayer battles on the phone. PUBG players can play with as many players as they like in different locations. The game offers the most intriguing graphics and controls.

Fortnite has long been hugely popular on the PC and is now available on smartphones. The game is based on shooting, where people can use their tactical skills to win the game. They can either play the game alone or in teams. The app offers a variety of options for character looks, weapons, and combat zones.

Pokemon GO uses augmented reality, where people must follow the virtual Pokemon to catch it. In the course, Pokemon takes people to different countries. An exciting game for travel lovers to explore the world.

Call of Duty had to be on our top popular mobile games list. The shooting game offers the most engaging HD graphics and original cards from Black Ops and Modern Warfare. Call of Duty offers game modes where up to 100 players can participate simultaneously.

What are the Factors Affecting The Cost To Build A Gaming App?

Developing an online gaming app is complex and expensive. A single mistake can cause a massive loss. Thus, gaming app developers spend valuable time on pre-development planning and strategy. They create a detailed tactic and gaming strategy in the Game Design Document (GDD). Thus, this document is fundamental for the entire mobile game development process.

The GDD covers the following things::

Storyboarding involves the story of the game which must be interesting to raise curiosity among users to play the game. The story should engage your audience to make people stick to the game. It involves deciding the game characters, plot, and the game environment. The story characters and plot must relate with users to stimulate their interest.

The platform Android or iOS or both, which you choose to build your mobile gaming app primarily affects the cost. Developing a mobile gaming app on Android costs more than iOS. However, Apple’s administration is more expensive than Android. Cross-platform game app development is cheaper than native development.

A game design includes many layers; thus, designers must devise a proper plan to avoid bugs or glitches. The game layers include the gaming environment and gameplay. The user experience for mobile gaming applications must be highly engaging and satisfying. Thus, it would help if you had UI/UX designers, architects, and game artists who are highly experienced.

You can hire expert UI/UX designers from UCS to design the most appealing mobile gaming applications. The hiring models are flexible, and the costs are budget-friendly.

The location of gaming app developers will directly affect the overall development cost. Hourly rates of developers are different in the US and India. With every new country or location, the rates will vary.

As you see, the hourly developer costs in India are very low comparatively. So, you can hire gaming app developers from UCS at the most budgeted costs.

The most significant factor that affects the cost of a mobile game app is the development phase. You need professional gaming app developers and engineers to build dynamic mobile gaming applications.

The next step is to test the application once it is ready. Testing and quality assurance remove all the bugs and loopholes before the release.

So, always count the cost for marketing while deciding the budget for your gaming application.

The type of mobile game also affects the cost of developing a mobile gaming application. The different game categories and genres can be simulation apps, social gaming apps, or casual gaming apps. Based on complexity, then gaming apps can be:

casual 2D games are basic games with 2D graphics and sound. These games are easy and quick to build and can easily be scalable. The development of mobile game development cost ranges between $50,000 – $100,000.

Social games are games that multiple players can play through social platforms. Gaming app developers build these apps with an SDK offered by the social platform. Building social games ranges between $100,000 – $250 000.

Games like Angry birds fall under this category that offer good graphics, story, and sound. Such games successfully keep users engaged for fun and to reach higher levels. The cost to develop mid-level games includes $250,000 – $700,00.

Action games are the most popular genre that includes battle or shooting games. Examples of action games include Battle Royal, Clash of Clans, etc. Building such games ranges between $50K – $300K.

Businesses and gaming app development companies are using AR and VR in games like never. Such games take users into the virtual gaming world and thus offer the most immersive gaming experiences. Such games are expensive to develop comparatively and range between $100K to $400K.

A game with simple features and casual graphics is less complex to build and, thus, costs less. On the other hand, complex games like PUBG or Pokemon Go, include complex features like high FPS, HDR Graphics, voice integration,etc., that increase the overall game development cost.

A multiplier game enables players to communicate with each other during the play. Such games fall under the high-level and AAA games category. Such games require voice integration and high internet speed. Such features raise the game development cost.

What are the Popular Mobile Game Development Tools?

Another popular mobile game development tool is Titanium. It facilitates modular programming and allows developers to use a single code base for different mobile devices. Thus, developers save a lot of time and coding effort.

The tool is powered by Facebook and offers detailed documentation, making it easier for developers to learn and develop games quickly.

Unreal Engine is user-friendly and does not require expert knowledge in mobile game coding. Beginners can use the app to create gaming applications effortlessly.

Solar 2D or Corona SDK is an easy-to-use tool that allows beginners to develop 2D games. The app offers a fundamental simulation feature to allow developers to see how the app will look after the changes.

How Much Does Mobile Game Development Cost?

As you know by now, the cost depends on many factors and the steps of the mobile game app development process. The type of gaming app, app platform, design, features, etc., decide the cost.

It is good to research your audience, market, and app specifications before starting the development process. Your mind should be clear on the features required to develop your app. It will make it possible to calculate a reasonable cost of game development. Further, there will be no confusion, errors, or reworks, and you can save these unwanted costs.

It is always better and wiser to start with an MVP. An MVP includes the essential features and, thus, requires a lesser initial investment. With an MVP, the game app owners can gather user feedback and gradually improvise and add new features.

Yes, of course. We develop native and hybrid gaming applications. We use advanced cross-platform frameworks that deliver native-like, high-performing and engaging applications.

You can earn revenue from your gaming applications in many ways. Here are the most relevant ones:

We hope the answer to your question- how much does it cost to build a mobile gaming app is clear. Now, you know the cost of your mobile gaming apps depends on what factors and how to control the cost.

If you have any questions or press inquiries, send us an email on hello (at) upsquaretech (dot) com You can also send us a message via the below form:

© 2023-2025 Upsquare® Technologies. All Rights Reserved.
Menu
We use cookies on our website to give you the most relevant experience by remembering your preferences and repeat visits. By clicking “Accept All”, you consent to the use of ALL the cookies. However, you may visit "Cookie Settings" to provide a controlled consent.
Change my preferencesI agreeI decline
Manage consent

This website uses cookies to improve your experience while you navigate through the website. Out of these, the cookies that are categorized as necessary are stored on your browser as they are essential for the working of basic functionalities of the website. We also use third-party cookies that help us analyze and understand how you use this website. These cookies will be stored in your browser only with your consent. You also have the option to opt-out of these cookies. But opting out of some of these cookies may affect your browsing experience.
Necessary Always Enabled
Necessary cookies are absolutely essential for the website to function properly. These cookies ensure basic functionalities and security features of the website, anonymously.
Functional
Functional cookies help to perform certain functionalities like sharing the content of the website on social media platforms, collect feedbacks, and other third-party features.
Performance
Performance cookies are used to understand and analyze the key performance indexes of the website which helps in delivering a better user experience for the visitors.
Analytics
Analytical cookies are used to understand how visitors interact with the website. These cookies help provide information on metrics the number of visitors, bounce rate, traffic source, etc.
Advertisement
Advertisement cookies are used to provide visitors with relevant ads and marketing campaigns. These cookies track visitors across websites and collect information to provide customized ads.
Others
Other uncategorized cookies are those that are being analyzed and have not been classified into a category as yet.
SAVE & ACCEPT